The above is a clipper card.  Click on it for more info

A quote from the book "Greyhounds of the Sea":

Page 281 “The Andrew Jackson of Mystic, the Mary Whitridge and Carrier Dove of Baltimore, and Flying Mist of Medford , were not only very burdensome but very beautiful ships which made runs that are records to this day.”

The medium clipper Carrier Dove grounded and sank just off of Tybee Island Georgia.  Although many clipper ships surely visited the port of Savannah throughout the age of sailing, Carrier Dove is the one that came here to stay.  She had a long and illustrious career before meeting her end on what was then known as Stone Horse Shoals, just to the southwest of what is called Tybee Roads.   This site is dedicated to this great “Greyhound of the Sea”

This site will welcome any information that can be given about The Carrier Dove and all volunteers willing to help in gathering more interest.

Please keep visiting and join me in the search.  There is much more to come!

One of the era's great sailing ships 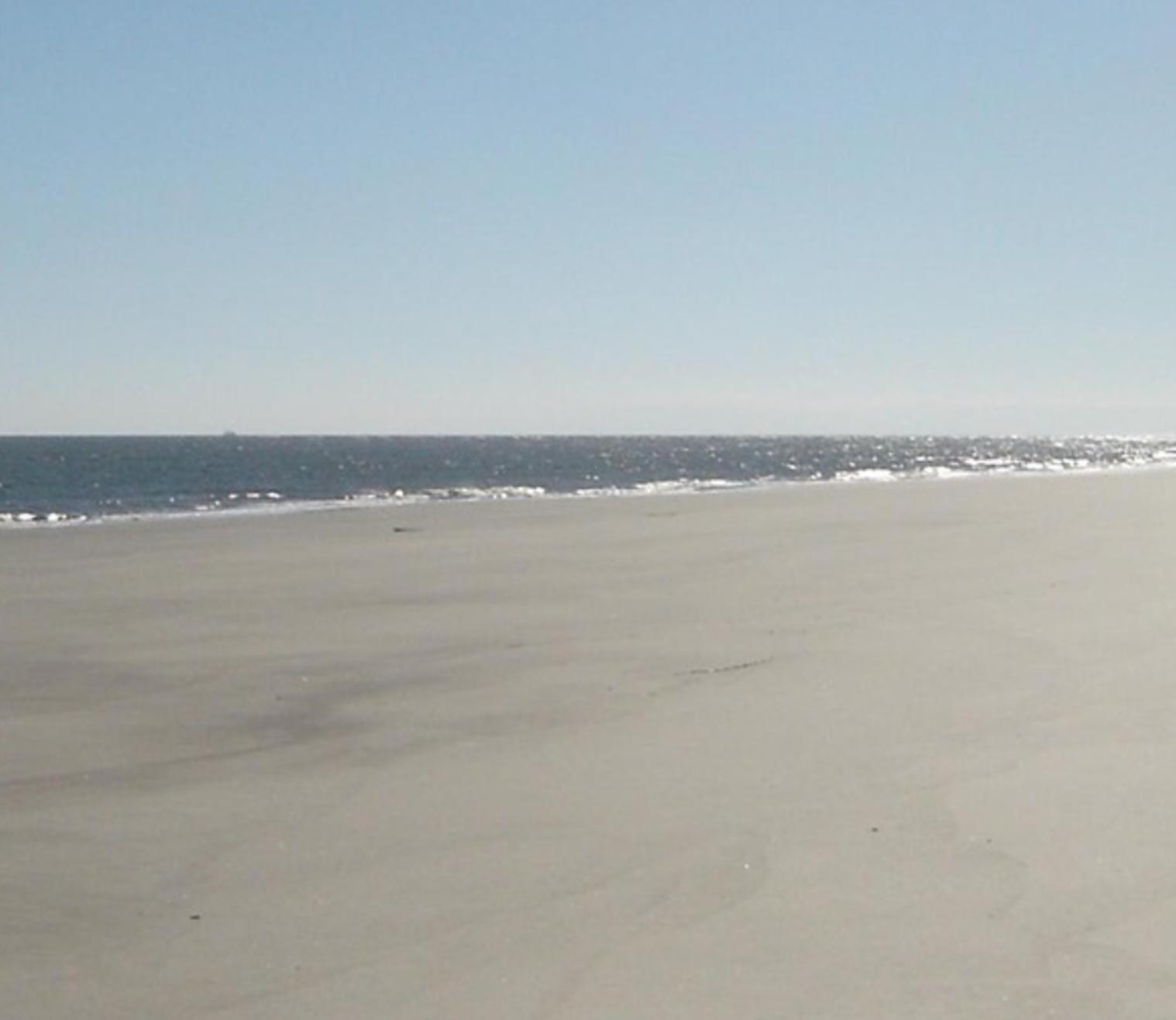 "The Finest Clipper Up" 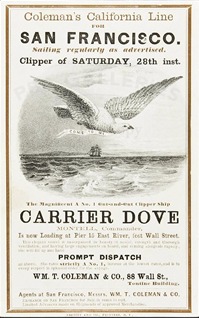 Extensive Ship Events
Where is the Samual Walters Painting?

About This Site and Contacts 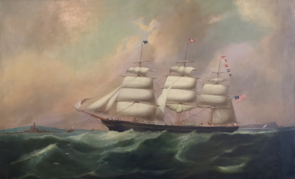 Why bound for Tybee?

The Challenges of making this site

Above is the Samual Buttersworth painting of Carrier Dove that can be found in the Nobel Maritime Museum at Staton Island, New York.

Below is one of the many captains of the Carrier Dove, GDS Trask

The Mystery of Tybee Light 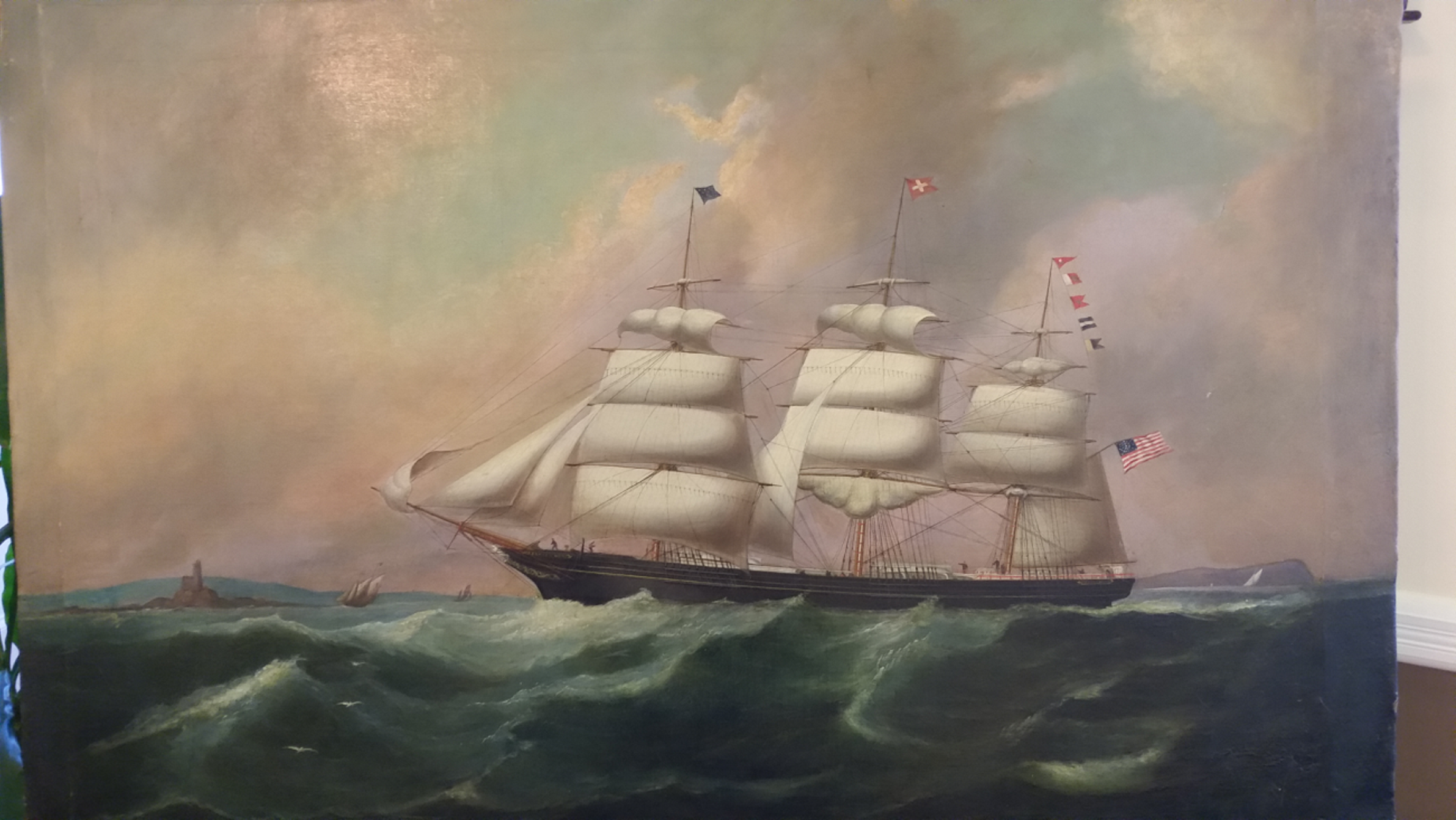 The Passengers
The Captains
Back to Top 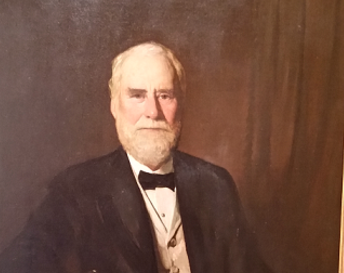 The Life and Times of a Clipper Ship

I like most Savannahians (the people who live in Savannah Georgia) had no idea she was there. She had been forgotten about long ago.

She ran aground off Tybee Island on March 3, 1876 and her crew after spending several days trying to re-float her gave up, went ashore and dispersed, her captain quietly left town.   The wreck had been sold for salvage on the courthouse steps for the paltry sum of $54.00. There were several newspaper articles about her sad plight and how the captain had tried in vain to save her; how he had finally given up and then stripped her of all of her sails and running rigging.  Through the action of the waves Carrier Dove's hull probably didn't last too long.

The winter storms had been severe that year and ships sinking and running aground were an everyday occurrence in those times and since she didn't have any cargo and no one died, she would have been quickly forgotten.

Today when I mention her in conversation most people immediately start asking about treasure and what could be found down there. It's only sixteen feet of water that she lies in. Turbulent and cloudy though it is, surely you could pull something of value up?  So goes the conversation. There is a glint of excitement in their eyes but it soon fades when I tell them that I am not much interested in the physical treasure she left behind which would be of no interest to anyone other than perhaps a marine archaeologist. There would be nothing but dull black and gray, shapeless bits that may have been ships timber, some stone that was used for ballast but it would be buried several feet into the sand. Who knows, the man who purchased the rights to salvage her may have even unloaded that stone for use as paving in some Savannah street; a few pieces of iron, maybe something that resembled a ships fitting. But that would be it. Perhaps one day there will be a way to resurrect sunken ships but I don't know much, if anything about that.

The real value to me is the story of her life which has turned out to be a treasure. And not just a personal treasure but a national and world treasure. This is a ship that was born in the most exciting times in America's history. She was launched in eighteen fifty five in Baltimore to much fanfare. Her builders and crew were men who were deeply involved in the building of the United States because they were racing to get to the other side of the continent; the unknown and new side that had just discovered gold. The ships that were built just before her were built to be fast and get as many people around Cape Horn as possible. But their builders soon discovered that while they were getting people there they weren't getting cargo there.  The earlier "Extreme" Clipper ships like the Morning Light and Challenge could carry people very well but they weren't getting the supplies like dry goods, the clothes, the tools, the furniture and food; the every day things that these people had to have. Their hulls were built with a lot of “dead rise” , the shape they wanted to give good speed but not good for carrying cargo. So the Carrier Dove was built to answer this problem. She was called a “Medium” Clipper. She would have been the space shuttle of her day. She could carry large amounts of cargo and people at the same speed as the “Extreme” clippers that were built before her and through those same Cape Horn waters.

The Carrier Dove is a treasure.  There are other wrecks and remnants of these once fantastic clipper ships, both medium and extreme that are scattered throughout the world. Pieces of them have been recovered from places like the Falkland Islands and there is even the iron framed Cutty Sark lying in state in the UK.  She is visited every year by thousands.

Why is Carrier Dove such a treasure? Just Google her. That's why! The New York Times, the San Francisco Papers, the Australian Papers and even the Savannah Morning News and Press have fantastic articles about her activities. As I began to search her name the pieces of information began to reveal themselves as people and their stories. A good writer of fiction or fact could literally pull an epic adventure out of every published voyage she took and she took many. From the frightening storm that nearly tore her to pieces on her maiden voyage to the day she grounded with such little fan fare twenty one years later, Carrier Dove broke speed records, took part in and witnessed the building of several great nations, carried one of the first steam engines to California, transported three hundred plus immigrants to Australia and even more to the new United States, carried the largest shipment of coal to cross the Atlantic and transported theater companies on their way to entertain those same pioneers and immigrants.  There was romance and babies born on board.  She also had her dark side,  the kidnappings,  the deaths and cruelty to her crews, the collisions and groundings, the law suits and sharp dealings of her owners and masters.  Once you start delving into the history of this ship the real treasure just spills out of her; our heritage.