But there are questions that remain about her:

Why was she bound for Tybee, an island with no industry to speak of?

Why have there been no pictures of her to be found even though one was painted by the famous clipper ship artist Samuel Walters? Wikipedia Link

Why was she traveling in ballast with no cargo or passengers from Liverpool?  What became of the Captain and his family and the crew.

People had followed the events of her grounding for the last several days and read about the rescue attempts by the steam tugs in the Morning News.   But after it was learned the tugs had given up trying to pull the Carrier Dove off the shoals interest would wain. There the Carrier Dove would sit as the days turned into weeks.  Her mast would be cut down by salvers. Her hardware picked off by people in small boats until any and everything of value had been stripped. Her hulk would stay there for a while and serve as a warning to passing vessels before settling below the shallow waters for good. And so goes the end of the Carrier Dove.

Below you can see where the wreck of the Carrier Dove was put up for auction on the Customs House steps and sold for less than a hundred dollars to a Mr John Kelly.

Above is what is known as a "Clipper Card";  basically a small poster advertisement for the fast clipper ships of the day.  If you wanted to get to the California Gold Fields as quickly as possible this would have been the way to do it. 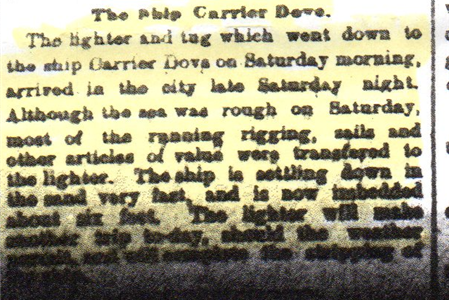 March 4, 1876  from the Savannah Newspaper archives at the Georgia Historical Society

Several hours later a dejected crew and family would huddle on deck in the cold morning sun as the waves from the northeast continued their assault.  They felt the bumping and grinding of the hull against the sandy shoal.  It would warm soon and they could comfort themselves in the knowledge they were going to be saved.    While they waited for the tugs to arrive the bumping and grinding would continue as the wind which was the Carrier Dove's friend the day before would become her executioner, building the waves into battering rams and shoving her once beautiful hull ever deeper on to the shoal.  Later that day the captain  would have felt her dying under him as he helped his family on to the boat from the steam tug B.Bramell that was standing by.  He would go ashore with them but leave some of the crew with the ship. The next day the steam tugs would return with the captain, his lips pressed tight in despair as he clambered back aboard with a salvage crew and found the cargo holds already full of water.  The Carrier Dove had bilged.    Her seams had opened and the seas continued to build.  There was nothing to be done but save what they could.  The sails and some of the rigging were removed and the captain left his once proud ship to the wind and waves. 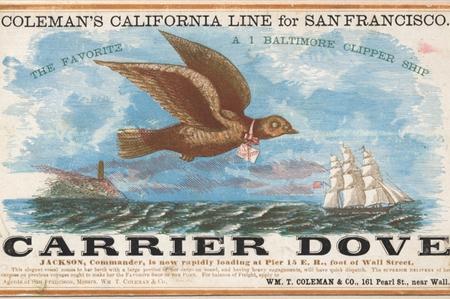 The crew this dark morning,  may have been exhausted.  No one knows.  But what we do know is someone had made a fatal mistake in navigation, putting the ship in a position that was to be unrecoverable.  Or, after finding Tybee Roads she had dropped her anchor only to have it drag.  In either case, hearts would have been in throats as everyone standing would be thrown forward.  They would try to steady themselves as they stood back up and felt the ship twirl on her keel and heal over.  Then the panic and the shouting and the dashing about would have begun.  But it was too late to save her.  The Carrier Dove had grounded on what was then known as Stone Horse Shoals, just to the south of Tybee Roads. 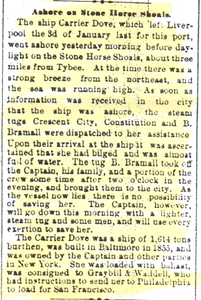 At 4:00 AM on the dark and windy morning of March 3, 1876, the long black hull of a ship shot through the chilly Atlantic waters just to the south of the Savannah River.  Directly to the west, just a mile or so, lay the shoreline of Tybee Island.  A few people there may have woken sometime in the night to the sound of waves crashing  on the beach.  But they would have been used to that in the month of March.  Of course there were many awake on that ship.  They would have been on deck and glancing to the west and then up again at the three huge mast that stretched up into the darkness. They were sheathed in white canvas sails stretched tight with the strain from the gale that was blowing.  The crew would have been full of anticipation.  This was to be the day they would make landfall.  The ship had been at sea for several weeks, crossing the Atlantic from Liverpool England.   Her name was the Carrier Dove; a clipper ship, one of the last of her kind.   She was old but still beautiful with the sleek lines of a clipper.   When she was young she was a contender for the  speed records set by clipper ships.  And she was a working ship having carried one of the first steam locomotives; the engine for the San Francisco to San Jose line around Cape Horn from New York to San Francisco. She did it again later in 120 days carrying another locomotive through the most dangerous waters in the world.  The New York Herald published an account of her sailing from Liverpool to Melbourne in 79 days around the Cape of Good Hope.  She once broke the record for the largest shipment of coal from Liverpool to New York. 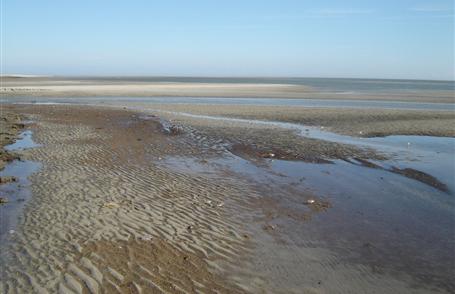 Looking in the direction of what was then known as Stone Horse Shoals from the southwest.  They no longer call it this.  Probably to avoid confusion with the shoals off of New England with the same name. 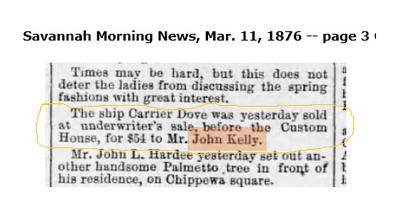 The Bad Month Of March

As you can see,  The Savannah Morning News was reporting on the Carrier Dove as late as April.  It alludes to a storm.