The magnificent portrait of the Carrier Dove.  Residing at the Noble Maritime Museum in Staten Island, New York.

Captain GDS Trask, one of the masters of the Carrier Dove and also one of the Governors of Snug Harbor

It was such an awe inspiring feeling to be so close to the painting of this ship which seems to have haunted me for over a year now. I have seen a digital copy of the Samual Walters painting and the differences are distinct. There was more detail on this painting and it is clear that her figure head is not that of a dove as would be expected but that of beautiful “partially clad” woman as was mentioned in the book "Ship Carvers of North America" by M.V. Brewington. It had caused a bit of sanctimonious clucking from a newspaper reporter in Baltimore when she was launched. It was exciting to see the same beautiful round cupola styled deck house in the after part of the ship and I pulled out my copy of the Samual Walters painting to compare them and they were spot on.

I just recently received an email from Ciro Galeno with information he had gathered for me from one of Snug Harbor's historians; Megan Beck:

"Information found through the Smithsonian Institute indicates that a painting of the Carrier Dove was given as a gift to Captain GDS Trask, the Master of the ship, and is currently owned by Sailors’ Snug Harbor." 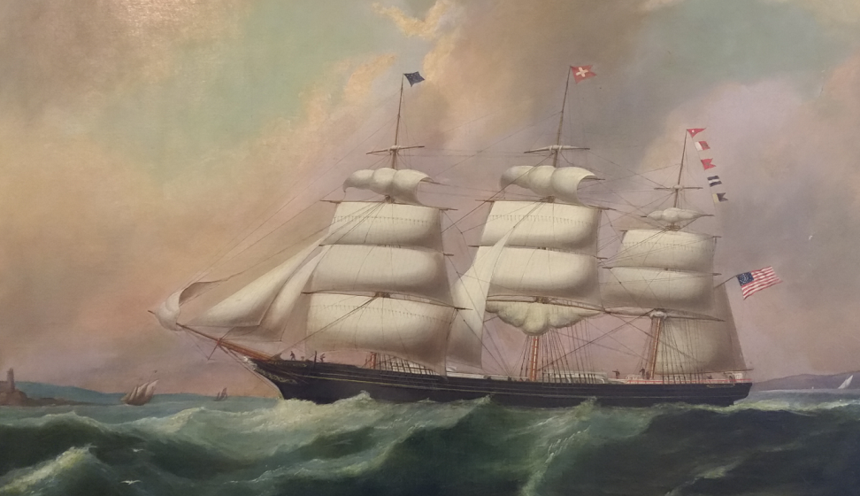 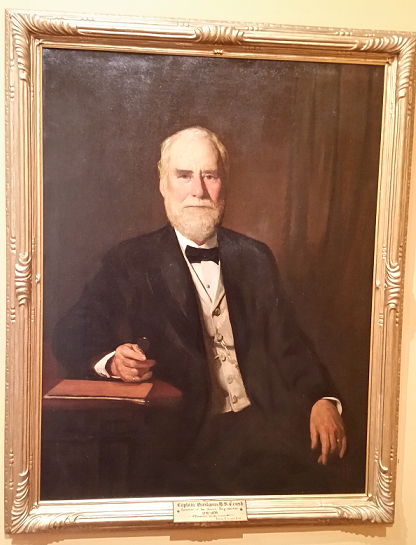 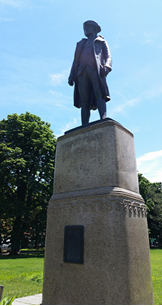 Above is a statue of John Randal, the man who founded Sailors Snug Harbor Retreat

When I first discovered the lawsuit the Carrier Dove was involved in concerning her collision near Liverpool I began to do searches on GDS Trask.  That is when I came up with this:

* URL at bottom of this page

I then began searches on Snug Harbor and found a great deal of information about this wonderful place that was built as a sailor's rest home on Staten Island.  It turns out that  Captain GDS Trask became the Governor of Snug Harbor and during his tenure at that storied institution had to overcome many challenges.

So in just a few weeks I was on a plane to JFK airport. The next day my daughter Natalie drove me to Staten Island. The grounds of Snug Harbor are quite impressive with beautiful Georgian style buildings surrounded by lawns and gardens, all well trimmed and manicured. The retreat is now used for gatherings, concerts, ceremonies, parties and art exhibitions. Snug Harbor is now a place where artist have a chance to show there work. And what is so stunning about this place is the evidence of the great generosity that was bestowed on the sailors who retired there.

After spending years at sea many sailors had no chance of a future and no money. Here they found a home and it was Captain Trask and others who made sure they would live out their last days in comfort and enjoy the respect and dignity that so few of them had when they were enduring an incredibly hard life before the mast.

GDS Trask made sure the grounds they retired to were beautiful and that beauty remains. It seems that spirit of commitment is still there and influences the staff to this day. They are all so accommodating. I just have to say that it was a wonderful experience to meet everyone involved in Snug Harbor and The Noble Maritime museum.

We were given a tour of the museum and learned of other heroes of Snug Harbor.   John A Nobel was the retired sailor and artist that fought to keep Snug Harbor from falling to the real-estate developer's bulldozer and they honor him with his art work and the very boat that he lived on being placed in one wing of the museum.

The museum had a friendly feeling in spite of the fact that the building that houses it is so impressive.  Look for the URL at the bottom of this page to learn more about John A Nobel and Sailors Snug Harbor.

After guiding us through several rooms full of paintings and ship models we stood before the painting of Captain Trask.   He looks like Robert E. Lee to me!  What do you think?  Captain Trask became famous for his courage, honesty and great vision in the troubling times that befell Snug Harbor. He fought a great deal of corruption.

During our personal tour with Rae and Ciro we were shown many wonderful paintings and artifacts but they saved the painting of the Carrier Dove for last. Finally we stood before a magnificent ship charging through an angry sea. Unlike the Samual Walters portrait, her sails are darkened to reflect the reddish sky.