Was the Carrier Dove in distress before she grounded? She may have been short handed.  Was she here for something other than to load freight and passengers?  The practice of Shanghai was big in the late 19th century. 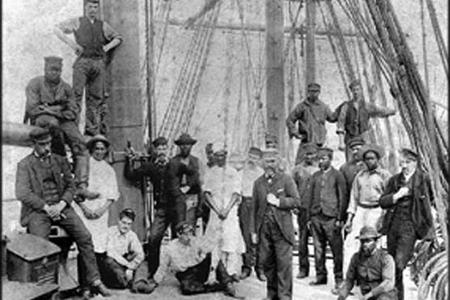 Or it could be that Savannah/Tybee may have been a place that would be good for legitimately recruiting crews since many of the fast clippers of the day had been known to recruit black sailors.  Few else would be willing to take on the dangerous work of sailing a tall ship around Cape Horn for such low wages.  In 1876 there would have been a lot of men both black and white looking for work and as you can see in the pictures below the crews were integrated. 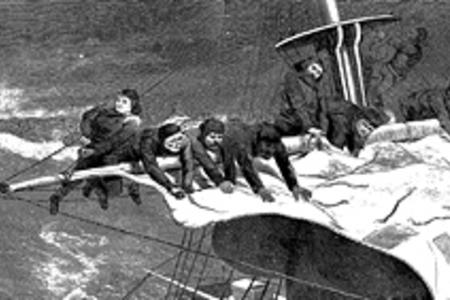 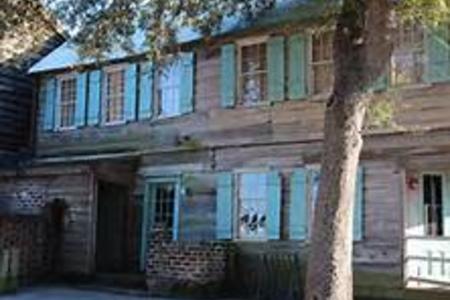 If you have ever visited the Pirates House Tavern in Savannah another more ominous reason may come to mind;  the practice of shanghai, the brutal act of kidnapping young men for forced labor on a US ship.  The lure was usually women and drink.  Most would be drugged and then robbed.  They would wake up the next day on a ship bound for sea.

The crew of the British ship Rathdown, photographed in San Francisco in 1892. The two men in aprons are the cook  and steward, but the other black men are all seamen.  From the website for San Francisco Maritime Park.   www.nps.gov 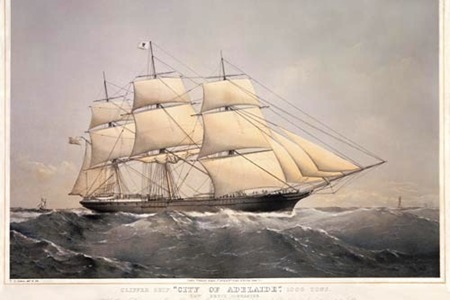 The Clipper City of Adelaide once had a crew that consisted of 26 ABs, all of them black with a white captain and officers.

In November 1884, Parker conspired with a group of Boston shippers, who filled Mary Celeste with a largely worthless cargo, misrepresented on the ship's manifest as valuable goods and insured for US$30,000 ($790,100 today). On December 16, Parker set out for Port-au-Prince, the capital and chief port of Haiti.[121] On January 3, 1885, Mary Celeste approached the port via the channel between Gonâve Island and the mainland, in which lay a large and well-charted coral reef, the Rochelois Bank. Parker deliberately ran the ship on to this reef, ripping out her bottom and wrecking her beyond repair. He and the crew then rowed themselves ashore, where Parker sold the salvageable cargo for $500 to the American consul, and instituted insurance claims for the alleged value.[

Could this have been the purpose for the Carrier Dove coming to Tybee? There is a mystery as to why there is no record of her grounding in the Tybee Lighthouse logs. Hopefully for Captain Merriman this was not the case as he seemed to make a great effort to have the ship pulled off of Stone Horse Shoals.

But there is a hint of suspiscion.

This is all speculation of course :)

But, if you talk to any old salt or river rat that has worked in "River Town" as Savannah's port is known you will most always hear a story of some intrigue whether yarn or the truth. And that is all I will say about this for now.

Above pic from the Wikipedia article about Mary Celeste 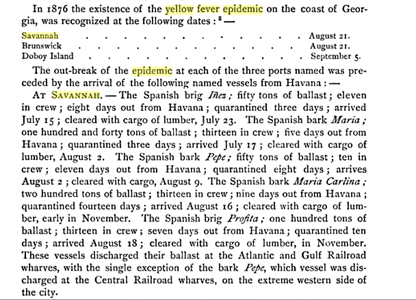 From some more poking around I am discovering that ships entering port seemed to be one of the suspected culprits for the spread of yellow fever.  I am not sure if they had definitely pinned the cause of this disease yet on mosquitos or just suspected the ballast to be germ ridden.  If they did suspect mosquitos at that time, did they think the ballast and bilge water could be a host for their larvae?

On line search turned up this:

But all of these ships;  Inez, Maria, Pepe, Maria Carlina, Profita were coming from Havana.  Were British ships coming from colder climbs also required to check in?  And where would the quarintine station have been?

Above is the quarantine station on Blackbeard Island.  Picture taken from The New Georgia Encyclopedea web page. Click on it to get more info about Georgia's Quarantine stations.  One was originally built on Tybee's Lazaretto Creek.  From which the creek got it's name!  But that one was shut down years before the Carrier Dove made her voyage to Tybee.  However, there was a station on Cockspur Island.  (I am still researching that one) 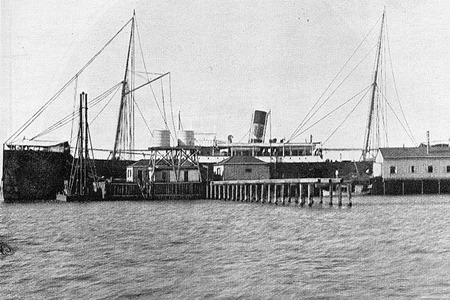 Or could the Carrier Dove have been heading for the Quarantine Station on Cockspur Island?  Or Blackbeard Island?  After 1876 all ships approaching the Atlantic Coast were required to check in.  As the year 1876 progressed another yellow fever epidemic in Georgia's history began to unfold.

Below is an excerpt from Captain John D. Whidden's wonderful book:  "Old Sailing Ship Days"  "From forcastle to quarter-deck"   A grand account of a sailors life as he worked his way from cabin boy to Captain in the years  from 1832 to 1870.

"Returning to Boston, I engaged as first officer on the ship "James Guthrie,"  Captain Chase, bound in ballast for Savannah.  The crew were colored, with a colored boatswain, a very good set of men, and good sailors.  A week from port the "Guthrie" encountered a very heavy gale.  The steamer "San Francisco" was lost in this gale, and her passengers were rescued by the British ship "Three Bells,"  Captain Creighton.  For ten hours we scud before it,  under a close -reefed fore topsail, with the sheets eased off a fathom or so, and two men at the wheel with an officer conning them to see that they did not allow her to broach to, in which case, being so high out of water, she would undoubtedly have been on her beam-ends in a moment.

There was not a high sea, the wind being so strong as to prevent its rising.  It was covered with foam, snow white.  We passed through the gale without the loss of a rope-yarn and made the land, coming to anchor in the Savannah River off Tybee Island.  Captain Chase went up to the city on the tug,  and returning the following day, we got under way and proceeded to Mobile Bay,....."

So Tybee could have been very easily just a communication point?  Perhaps a historian should have a good look at the telegraph capabilities and activities of Tybee and Savannah in these times.

Or could it have been Barratry? 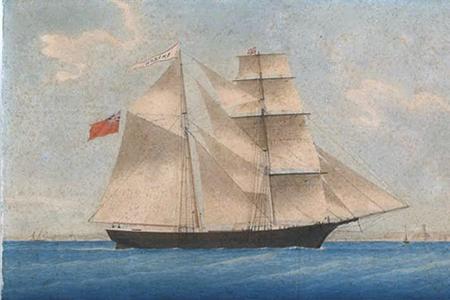 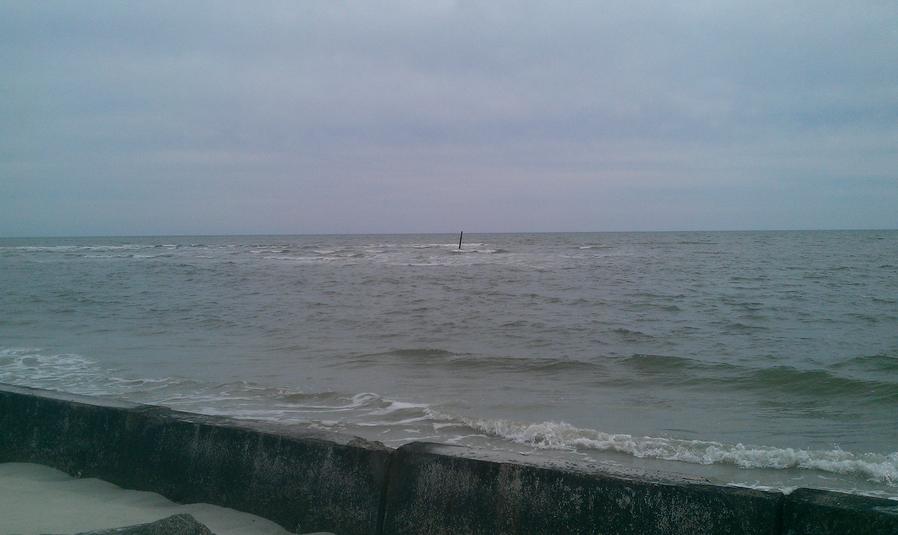 Barratry is willfuly destroying a ship or it's cargo for the purpose of falsly claiming insurance awards.
From Wikipedia:
Description[edit]

Barratry is usually considered a crime against the ship's owner. Therefore, if the owner himself chooses to wreck the ship, no crime is committed, as the owner simply destroyed his own property - however, this can be considered a crime against any other owners.[1] Also, harm to the crew can qualify as barratry regardless of who damaged the vessel.[2][3] Throughout the 19th century, courts in the United States struggled with defining and understanding the law. Courts have concluded that negligence is not enough to qualify as barratry, but that it instead requires an intentional act and an intent to defraud.[1] Similarly, deviating from the assigned course is also not by itself barratry.[3]

An example would be some years after the famous ship Mary Celeste was returned to sea duty after being found abandoned near the Azores she was involved in another sad and final controversy. Her Captain, a man by the name of Parker, was accused of destroying the ship on purpose for the insurance money.
The following from the Wikipedia article about Mary Celeste:
.

Below is an excerpt from the Tybee Light House wreck report from 1875 to 1883.  Though this entry had been crossed out possibly because it had been written on a previous page by mistake, it refers to the crew of a ship (not the Carrier Dove) being sent to quarantine after being brought ashore on Tybee Beach: