~~Cork Examiner, Monday 20 July 1857 AUSTRALIAN EMIGRATION The tide of emigration to Australia continues. Day after day the quays of Liverpool swarm with crowds of our fellow countrymen and women, en route to the land of gold. With such an efflux of the population there has sprung up a very superior class of vessels engaged in the Australian Emigration Trade., We need hardly remind our readers that Messr. Gibbs, Bright and Co., of Liverpool, have for a series of years been famed for dispatching vessels, not only large, strong, and of superior sailing qualities, but fitted up in a manner which surpasses all other vessels engaged in the same trade. It was only the other day that the same eminent and justly popular firm dispatched a very superior clipper, the “Florence Nightingale,” well filled with goods and passengers: and they have now on berth as the packet of the 15th August a vessel which, for strength and beauty of arrangement, has not had an equal in the port of Liverpool. She is named the “Carrier Dove.” is a ship ---Baltimore clipper---of 3,500 tons burden, and fitted up in every department in a manner that defies competition. In a vessel engaged in the Australian Emigration Trade there are certain qualities requisite, without which it would be reprehensible to go to sea. These are –strength, ample and properly ventilated passenger accommodation. The “Carrier Dove” has these in a remarkable and unusual degree; she is knit together ~~as strongly as iron and oak timber—for every plank in her is of that world renowned wood---can make her. Her ventilating aparatus is not only ingenious but truly efficient, and such as cannot be disarranged or impeded in its functions by any of the many circumstances which interfere with the general modes of ventilation. The berths for every class of emigrants are unusually ample---each of which has, in the most sultry of climates, abundance of pure air. Cleanliness and neatness of arrangement seem to predominate in the minutest part of this splendid ship. Her captain is evidently a gentleman of taste and refinment, and studies in all his plans the comfort and convenience of every individual under his care and keeping. Bells are arranged all over the ship, by which means the cabin passengers can, without let or hindrance, communicate with the stewards , or the captain with his officers. Everything in every department is a model of cleanliness , efficiency, and general usefulness. A Captain who earns the thanks of the underwriters of his ship must be a seaman, and a navigator in the true sense of the word, such a man is the commander of the “Carrier Dove”. Captain Montell. Under trying and difficult circumstances in 1856 , when in command of the clipper ship, “Atalanta,” on a voyage from Callao to Spain, he took his vessel into Marseilles, hes crew having mutinied. The authorities of that port have testified as to his courage, and the care he took of the underwriters interest. Beside this, he is a renowned sailor; he has made passages from China to New York in 78 days, and on one occasion bet the far famed clipper ship “Flying Cloud” 15 days on the run from San Francisco to New York; and he has also brought the ship “John Cumming” from the longitude of Charleston to the Liverpool Docks in 16 days 20 hours. Anyone who examines the build of the “Carrier Dove” and looks at her peculiar rig must admit that she is constructed with the view of swift sailing. But when commanded by such a gentleman as Captain Montell has proved himself; and sided by a first officer who has been the sailing master of some of the fastest clipper ships in the world, it cannot be doubted that if the “Carrier Dove” gets a chance she will astonish the people of Melbourne by the rapidity of her run from Liverpool. We know of no vessel possessing a tithe of her passenger accommodation, nor one ore likely to make a swift run, or a captain and mate so celebrated for true seamanship, gentlemanly manners and feelings of benevolence to every grade and description of passengers. -------Liverpool Paper.

Were these examples of early infomercials?Interesting thing about these articles is they are nestled in amongst reports of murders, political commentaries and all other news articles. If they were there is no statement as such.   Perhaps money was placed in the hands of the reporters or maybe it was just honest admiration.   I would like to think the latter :)
But then again I suspect the competition was strong for the trading in immigrant passengers.  Look for the url at the bottom of this page that leads to an article about the actual circumstances that poor Irish immigrants faced along with the ships that carried them.

Tracking Captain Corner (was thought to be Captain Conner)  Below might be the start of a trail:

It looks like Baltimore will have to be my next place to visit. 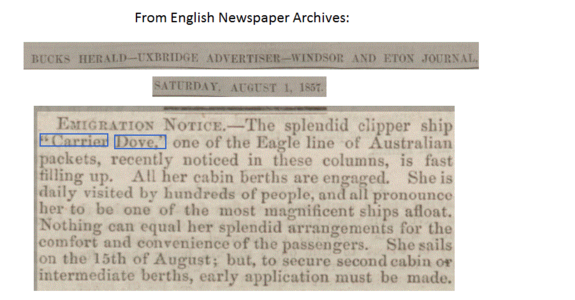 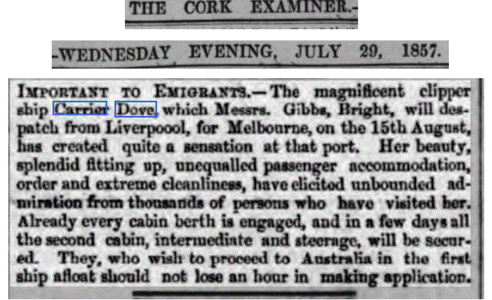 More articles discovered about the new and fabulous ship in 1857

In the past several weeks I have come on a great many new discoveries about Carrier Dove.  With everything now going digital the articles just keep appearing.  I have placed buttons for some of them and just text for the others.  Enjoy!

ANOTHER FLOATING PALACE, ----The magnificent clipper ship “Carrier Dove” now lying in Prince's Dock, Liverpool, and which will take her departure for Melbourne on the 15th of August, is the object of much attraction. She can be described in two words----magnificent and un-equalled. There is a place for everything, and everything in it's place. All her cabin berths are engaged, and those who would wish to reach the antipodes by her must make early application for second cabin, intermediate and steerage passages. The “Carrier Dove” is one of the Eagle Line of Packets, belonging to Messrs Gibbs, Bright, & Co. of Liverpool.

The Mariners Museum of Newport News
News of the Launching

Green is the newest...