As you can see "Merryman is listed as the master.  And he was traveling with his wife.  Many times captain's wives accompanied them on these long voyages and I assume she was with him rounding Cape Horn just a few months earlier.   It must have been a tragic loss for them, seeing their home and means of income be sold at auction on the courthouse steps.  Ten days later the Merrymans sailed for New York aboard the steamship San Salvador.  Probably taking the proceeds from this gloomy salvage back to their co-owners and partners. 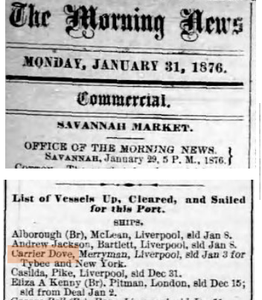 I have now confirmed that Captain R.L. Merryman was the master of the Carrier Dove when she went ashore on Stone Horse Shoals.  Thanks to the fantastic new Digital Library of Georgia's new online resource;  The Savannah Historic Newspapers Archives, I was able to find these postings in several of the day's paper's:

What would it have been like to sail as crew under a clipper ship captain?

The more I look into the relationship of the crew and the ships officers the more it becomes apparent that the 19th century became a time of controversy because of the situation of the gold rushes, both in America and Australia and led to the festering of the old practice of shanghaiing.   It must have been miserable to  deal with for  both the crew and officers .

But still there was glamor and excitement in the idea of such a fast ship.  For many a young man it could have been that shipping as crew could have been the only way for him to get to those gold fields.  But then he would refuse to ship again and this was the problem the captains faced.  How to crew the ship after getting to San Francisco?  However back in New York and Boston and Baltimore plans were still being made and keels were being laid.  The reward for the investors must have been just too good.   For a brief time in the mid to latter part of the nineteenth century, clipper ship captains would obtain a certain “rock star” status with the fast passages and high profits they made for their owners and investors. The golden age of sail was producing ships that had never been imagined before and even though it was also the dawn of the age of steam for a brief and shining moment clipper ships were the fastest long range transportation on earth. Captains were sometimes offered lavish sums of money to best a speed record set by rival ships and would enjoy the recognition among the general public as well as their peers and others in the shipping community.
The master's responsibility was and still is to the owners and the cargo and passengers as well as to the crew of the ship. They are and were not treated as crew rather than a partner in the owners and investors endeavor. A master bears enormous responsibility and also personal liability for whatever happens during the voyage. He was also often the liaison for the shipping companies abroad and had extensive knowledge of the customs of the countries they were sailing to. He dealt with the licenses, documents and certificates, passports, health of the crew, bills of health as well as bills of lading. He had to carry and protect the bill of sale for the vessel which he may need to present to the authorities on entering a port. He had to account for every passenger and member of his crew in a foreign country. He had to keep a well stocked medicine chest and know how to use it and often prove this to the port authorities on entering or leaving those ports.

The master of a ship was usually a very reserved fellow who kept generally to himself and appeared aloof even to his officers.

The following is an excerpt from Richard Henry Dana's “The Seaman's Friend”
A Treatise on Practical Seamanship:

Throughout this description the reader becomes aware of the enormous liability placed on this one individual.

“When the vessel is well clear of the land, and things are put into some order, it is usual for the master to call all hands aft, and say something to them about the voyage upon which they entered. "...
"The master himself stands no watch, but comes and goes at all times, as he chooses.”...”The entire control of the navigation and working of the ship lies with the master. He gives the course and general directions to the officer of the watch. “....”When on deck the weather side of the quarter-deck belongs to him, and as soon as he appears, the officer of the watch will always leave it, and go over to leeward, or forward into the waist. “....”The master never goes aloft, nor does any work with his hands, unless for his own pleasure. ...”
“As the master stands no watch, he comes and goes as he pleases, and takes his own hours for rest. “....”Where there are passengers involved"... " the master has even less to do with the day's work; since the navigation and working of the ship with proper attention to his passengers is as much as can reasonably be requred of him. “ . . . ."The chief mate dines with the master and second mate looks out for the ship while they are below, and dines at the second table.”

The master of a ship generally stays aloof and alone.

"DICIPLINE:"
“As will be found in the third part of this book the master has the entire control fo the discipline of the ship, and no subordinate officer has authority to punish a seaman, or to use force, without the master's order, except in cases of necessity not admitting of delay. He has also the complete direction of the internal arrangements and economy of the vessel, and upon his character, and upon the course of conduct he pursues, depend in a great measure the character of the ship and the conduct of both officers and men. “
“He has power and influence, both direct and indirect, which may be the means of much good or much evil. If he is profane, passionate, tyrannical, indecent, or intemperate, more or less of the same qualities will spread themselves or break out among officers and men, which, perhaps would have been checked, if not in some degree removed, had the head of the ship been a man of high personal character. He may make his ship almost anything he chooses, and may render the lives and duties of his officers and men pleasant and profitable to them or may introduce disagreements, discontent, tyranny, resistance, and in fact, make the situation of all on board as uncomfortable as that in which any human beings can well be placed.”....

They were given the right to inflict “moderate correction” on a seaman “for sufficient cause; but he must take care that it is not disproportionate to the offence. If he exceeds the bounds of moderation he is treated as a trespasser, and is liable in damages.”

The mode of correction could be by “personal chastisement, or by confinement on board ship, in irons or otherwise. But there must not be any cruelty or unnecessary severity exercised. The mode, instruments or extent of the punishment are not laid down by law. These must depend upon circumstances. In cases of urgent necessity, as of mutiny, weapons may be used which would be unlawful at other times; but even in these cases they must be used with the caution which the law requires in other cases of self-defense and vindication of rightful authority.” …

One can only imagine what it would be like to confront a “crew” comprised of a mix of voluntary and involuntary individuals. To those young men who were still disgruntled about being the victim of a shanghai the idea of mutiny was probably considered often. Even though the ship was within the bounds of the laws both national and international to confine them and force them to work it would go against their nature to comply.

The master had the right to imprison his sailors in foreign ports as well as in domestic ports. He was also liable to be imprisoned himself for abuse of his crew in those same ports. In difficult years they found themselves walking a very fine line between righteous enforcer and brute for the sake of their ships and and owners profits. The system of shanghai, crimping and boarding master would cause many a good sailor and captain to quit an otherwise honest career.

Above is a portrait of one of the captains of the Carrier Dove:  GDS Trask

The following is a list of all of the captains of the Carrier Dove I have found so far:​

Was the first captain and the one who took the Carrier Dove through the hurricane on her maiden voyage, refused to return to New York and made for Rio instead under jury rig.   Apparently he was co captaining with Carrier Dove's second captain; Frances Montell on the epic voyage to Australia. Benjaman Tongue referred to a "second Captain" in his diary and Captain Theodore Corner was on the passenger and crew list.

There is more to come about this fateful voyage. I just haven't had time to prepare the postings yet. Keep checking in.

Captain Montell was in command when the Carrier Dove transported 300 plus Australians from Liverpool to Melbourne in 1857.  His motto from what I can make out from the diaries of Benjaman Tongue and Charles Bregazzi was  this:

"Cheer Boys, better times in store, hope our anchor, heaven our guide"
Apparently he repeated this saying several times in his speeches to passengers and crew throughout the Voyage.

Captain Andrews was master when Carrier Dove famously hauled the largest shipment of coal from England to Boston, apparently running aground after entering the harbor and having to have her cargo offloaded by a barge while waiting to be pulled off a bar.

I also have to be careful not to confuse other men who captained ships around that time with the name; Carrier Dove and were not our clipper. There was a schooner, a bark that sailed regularly in and out of Savannah and two fishing schooners, one in New England and another off the California Coast. Although most came later. It appears there was a very popular poem and song called Carrier Dove in the mid nineteenth century that caused a flurry of naming things "Carrier Dove" And also a spiritual publication and a school publication.

The Dark Side of Captain Merrimen 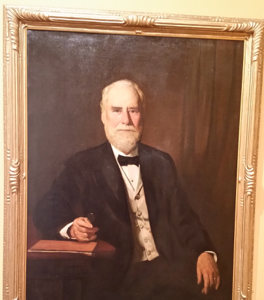 Still researching Captain Fish but I have recently discovered his name on the St Johns survey sent to me by Lloyds.

There is a good deal of information about Captain Trask.

It appears he became the"Governor" of Snug Harbor in Statten Island which was the famous rest home for retired seamen.  (I am very excited about this discovery and I have contacted Snug Harbor and visited them. They were kind enough to let me post his portrait below.)  Click the button below to read his bio:

This from:
Warwick's Keystone Commonwealth: A Review of the History of the Great State of Pennsylvania

“Although a resident of Philadelphia since childhood, Joeseph W. Catharine was born on the Atlantic Ocean, while his parents were on a voyage in the clipper ship “Carrier Dove,” of which his father was captain. The elder Catharine, who was one of the old line of Maine seafaring men, afterwards commanded steamers plying between Philadelphia and Southern ports, and also Union transport steamers during the War of the Rebellion.“