The sisters Adelaide and Joey Gougenheim
Home
Back to Ship Events 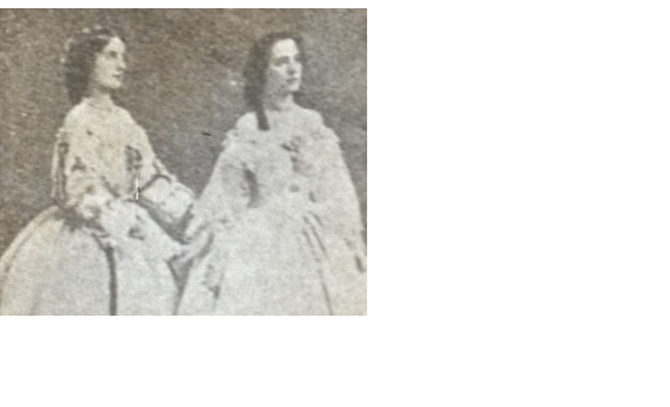 Could this have been the Miss Joey mentioned?:

From a web search:

~~The Gougenheim sisters' 1857/58 Melbourne season, which started on 2 December 1857 and concluded on 6 March 1858, involved quite a deal of controversy. Josephine Gougenheim was sued twice by one performer for non-payment of wages and had insinuations publicly levelled at her by another over the same issue. For further details, see the Age 18 January 1858, p.5.   It looks like the Carrier Dove may have saved Miss Joey from another bad manager.

~~And what did Mr Eddy do when he arrived in Cork? Look below for when the Carrier Dove actually arrived in Cork Ireland. The dates seem to match up!  The article  below is also a link: 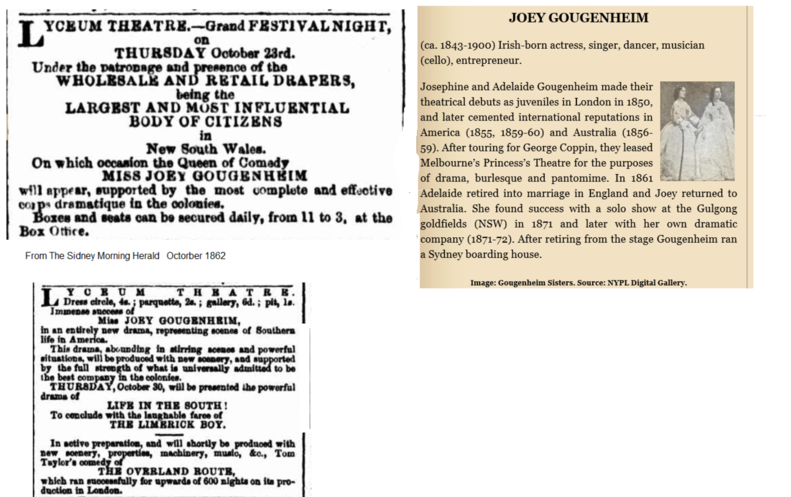 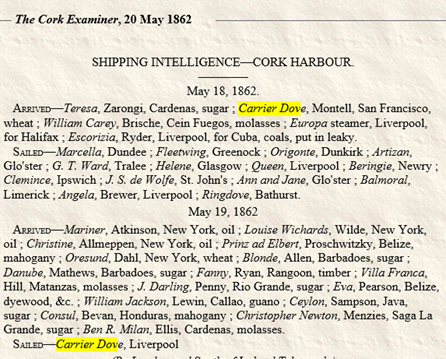 "CALIFORNIA GOSSIP.; The Great Flood, and the Losses Occasioned by it; also the Gains Tight Times in the Money Market A Theatrical Coniretemps."

"The only amusing incident that I can think of as having occurred during the last few-days, is that of the sudden departure from our shores of that pretty and talented actress, Miss JOEY [???], who, becoming disgusted with the gloomy state of affairs here, concluded to turn her pretty face toward Australia. Her last engagement was not very profitable, and the consequence was she got in debt -- that is, her agent, Mr. EDDY, did, all the same -- and his creditors, learning that he intended to give them the slip, got out warrants for his arrest, but being too old a bird to be caught in that way, a little plan was laid to frustrate their kind intentions, which was as follows: Miss JOEY embarked aboard a Dutch ship bound to Australia, to sail next morning. Mr. EDDY, with all the baggage and funds, secreted himself on board the clipper ship Carrier Dove, also bound out next morning for Cork -- the Captain of which was to put EDDY aboard the Dutch ship outside the Bar. Both ships sailed with the ebb tide, but on getting outside, the ships stood on different tacks, and were separated some miles. The Captain of the Carrier Dove, old sailor like thought more of a mile gained to windward than all the actors and actresses he ever saw, and instead of putting Mr. EDDY on board the Dutch ship squared away with a cracking breeze, which preceeding at first produced a look of wonder and open-mouthed astonishment on the part of Mr. EDDY, who demanded a compliance with the terms of the agreement, to which he received a short answer, and it was not until he became convinced that he was not in a very fair way to see Miss JOEY that he gave way to rage, indignation and despair. He stormed up and down deck, swearing, entreating and raving, but it was useless -- "to Cork and a market" was the only alternative, and to Cork he has gone sure. On the deck of the Dutch ship a similar scene was being enacted. When Miss JOEY saw the state of affairs, and the truth flashed upon her that her wardrobe, her money and her manager were heading for Cork and she for Australia, she let herself loose and went off into a touch beyond anything she had ever given the public on the stage. She raved and stormed and tore her beautiful hair, screamed and cried and offered unheard of sums to be put on board the Carrier Dove, but the Captain smoked his short Dutch pipe very complacently, and when the pilot left the deck Miss JOEY had gone off in a tragic faint in the cook's arms, upsetting his teapot and playing the deuce with the Captain's breakfast, and is now probably a hundred miles on her voyage, minus money, minus wardrobe and minus lover -- agent I mean. "Sick is life." PODGERS."

I wonder what the real names of "Miss Joey and Mr Eddy"were?