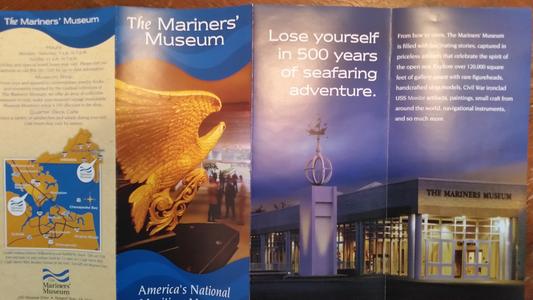 Click on the above brochure for the Mariners Museum Web Page

Several months ago I was sending out my usual queries to maritime museums and I got a call back from The Mariners Museum of Newport News Virginia. They had looked into my request and had some information for me. They wanted to know where to send it to. A week later I got a packet from them in the mail. It consisted of the mentions of The Carrier Dove in the book “Greyhounds of the Sea” by Carl C Cutler, Copyright 1930 and “Merchant Sail” by William Armstrong Fairburn There are quite a few mentions in Carl C. Cutler's book as you can see below and the one I liked best was his opinion of the Carrier Dove as being one of the medium clippers that combined beauty, speed and cargo capacity and having set a speed record which still stands today! (of course it was written in 1930 but I highly doubt a clipper ship of any kind was sailing after 1930)  Much thanks to the wonderful folks at the Mariners Museum!

Here are the mentions from Greyhounds of the Sea:

Page 281  “The results was the development during the next few years of a very fine type of vessel which combined to a rare degree, the beauty and speed of the extreme clipper with the huge stowage capacity of the old packet ships. Many of these later vessels, including the Andrew Jackson of Mystic, the Mary Whitridge and Carrier Dove of Baltimore, and Flying Mist of Medford , were not only very burdensome but very beautiful ships which made runs that are records to this day.”

Page 311 “Baltimore furnished two well-known ships, the little Mary Whitridge and the Carrier Dove, a very handsome 1700 ton ship. The latter made a run of 78 days from Liverpool to Melbourne in 1858.”

Page 328  “On the 23rd of October, the Carrier Dove, Captain Corner, arrived at Valparaiso 30 days from Melbourne, a passage very close to the record. “

Page 3647   “ All the other clipper ships sailing from an eastern port at the time of and for a month before the Resolute made slow passages, as the following record of the performances of the ten clippers sailing between September 19 and October 23 clearly shows:

The CARRIER DOVE had to put into Rio de Janerio for repairs and was there about seven weeks.

The SANCHO PANZA put into Juan Fernandez for water.

Page 3790  “Seven clipper ships arrived at San Francisco during the three days April 28-30, 1856, inclusive. (These were the only entries to the port during the eighteen-day period April 13-30 inclusive.) These ships and their sailing performances were as follows: Name Captain Tonnage From Date Arrival Length of Passage CARRIER DOVE Corning 1694 NY Oct 5 April 28 206 / reported time of 153 at sea Again Carrier Dove had been dis-masted on this voyage and had to spend several months in Rio.HLM

Page 3934 “Arrived in company with the ARCHER. The two clippers ran from the Pacific equator to Golden Gate in fast time of 15 days. ARCHER claimed a 119 day passage from New York, but record of the closest six sailings to the COMPETITOR gives the following length of passages from clearance to entry:

Page 2750 “Clippers” Constructed in the Chesapeake Territory during the Clipper Ship Decade, with a Record of Their Builders and Deep-Sea Service Year Name Tonnage Builder Owner Built 1855

Let me step in here to mention that Carrier Dove 208X42X26 1694 3 205, 158, 127 163.3 It seems the highest tonnage ships may have been handicapped. Her records were considerably better on Pacific crossings. She was one of the slowest on Cape Horn passages but also one can look at the tonnage as being a factor.

Page 2754 “Among other fast sailing performances of Baltimore clippers was a passage in 1858 of 78 days from Liverpool to Melbourne by the Carrier Dove and a run in 1856 of 32 days from Melbourne to Valparaiso by the same vessel. Her performance in the California Cape Horn service was poor; her best passage took 127 days and the two others 158 and 205 days respectively, the latter including a stay at Rio de Janeiro of about seven weeks for necessary repairs.”

Page 1822 “Outstanding Crossings of the southern Pacific from Australia to West Coast of South America” “about 16 months later the big medium clipper Carrier Dove of 1694 tons (built at Baltimore in 1855), under Captain Conner, arrived also at Valparaiso in 32 days from Melbourne and reported a passage of 30 days, pilot to pilot.”