The Buttersworth close up of Carrier Dove's Figure Head.  A woman's bare breast was thought to calm a stormy sea. 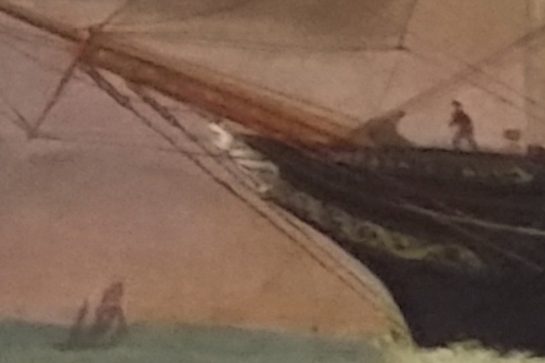 Thank you Sal!  Make sure and visit his web site if you get the chance.  (URL under his photo) 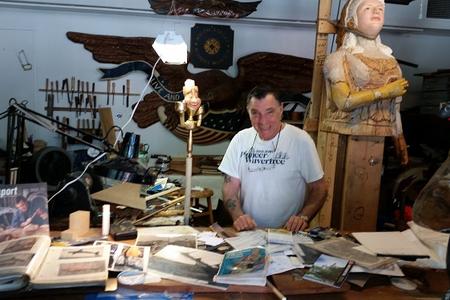 After visiting Snug Harbor on my first day in New York I spent the next at the South Street Seaport.  The museum was still closed for repairs due to the damage caused by hurricane Sandy but there was an interesting little shop next to the park where I sat eating a hotdog.  I had planned to make my way down to the pier to see the famous Cape Horner Peking but this certainly deserved a look first.

I walked in and found a gentleman carving a ship's figurehead of a woman.  The shop was full of carvings and nautical stuff.   Wonderful for me!

His name was Sal Polisi and I asked him if he had ever heard of the Carrier Dove.  He pulled several books from a shelf and suggested I look through them.    The first one was "Ship Carvers of North America"  by M.V. Brewington and sure enough there in the index was the ship Carrier Dove.  I confirmed it was the right one when I thumbed to the page and found it to be the right date, the right type, a ship and place, Baltimore.

To my disappointment again, no graphics of her figure head but the description more than made up for it.

So, here it is below:

James Mullen of O,  the head of the clipper Carrier Dove which caused the marine reporter of the Baltimore Sun to remark "The figure-head and it's attendant carvings do great credit to the artist.  But, we had a notion to question the taste of the designer, who placed a half-clothed woman in the place that a Carrier Dove, a messenger of old...to Father Noah, should occupy.  However, that is a mere matter of taste.  We cannot call the woman a "bird"."

I got a bit of a chuckle on reading about the Baltimore Sun Reporter being such a stuffed shirt.